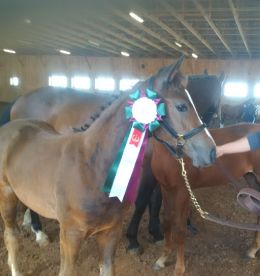 3 consecutive foal futurity winners in Ontario for VandenBrink Warmbloods and His Querido our stallion by His Highness out of Querida by Quatro B. He really stamps his foals with a beautiful face and super neck and topline. With quality gaits they are the whole package and continue to impress the judges and buyers. photos 2018 winner His Reverie, a filly out of Rivalia. 2017 winner Harmony a filly out of Restique . 2016 winner His Rival a gelding out of Rivalia

West River 2008 mare by Westporte out of premium mare Rivalia wins the Horseware Indoor eventing Challenge at the 2015 Royal Winter Fair with an incredible 16 second lead over two rounds.   Expertly piloted by Waylon Roberts for the owners, the Levely-Connolly family.

Frestique  at her show debut at Dressage Niagara with owner Gloria Woodruff. 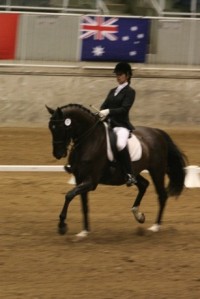 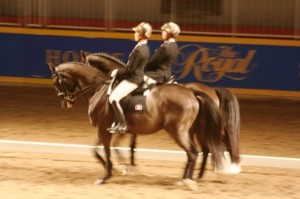 Providence 3rd level Champion at CNE left.  Showed successfully at PSG level.  Photo on right is of Providence in a special Rememberance day Quadrille at the Royal Winter Fair.

Oxford’s Ice, Won the Lieutenant Governor’s Cup Qualifier and was 8th at the Royal.  He’s had lots of top placings in the hunter ring.  Sold to show home in California to show as Amateur Hunter and in the PreGreens with the coach.

Fitzwilliam (registered Volant) many successes in the hunter ring including qualifying for and placing at the Royal multiple times in the very competitive Adult Amateur Hunter 18-35 division.

Rivella, many successes in the dressage ring , with a recent 1st and 2nd place at 3rd level in Saugerties NY.

West River, currently competing Prelim with Waylon Roberts, including a 2nd place at Waredaca in October 2014

Serafino’s show career started as a foal where he was declared Reserve Junior Champion at the Hogendoorn breeders show by Hakken Wahlman from Finland leading the jury.  He’s continued to impress the judges under saddle with championships at the USEF 4 year old level, and now wins at Training and 1st level with his Amateur Owner.