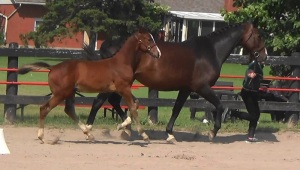 Had a great time at the Clinic and Inspection at Elite Equine in Fenwick. It was a long and very hot day, but nice to have 2 of the babies inspected. We’ll be going to the Orangeville inspection with the other two. The boys scored well with very positive comments from the inspectors. Bon Vivant (Bon Balou/Viva Voltaire/Maraton) (chestnut) showed off his athleticism by leaping through the air, and cantering and walking very well, but unfortunately didn’t show much trot. He really didn’t want to follow mom and decided to take the ring time being an adorable goofball. He received an overall score of 7.75 including a 9 for General Impression and Development and 8s for Conformation and Breed and Sex Type.  Special Edition (Special D/Redwine/Gribaldi)(bay) stuck with mom like he was supposed to which makes it much easier to show the gaits.  He ended up with an amazing score of 9.  His mom is back in foal to the same stallion.  Both foals are for sale.